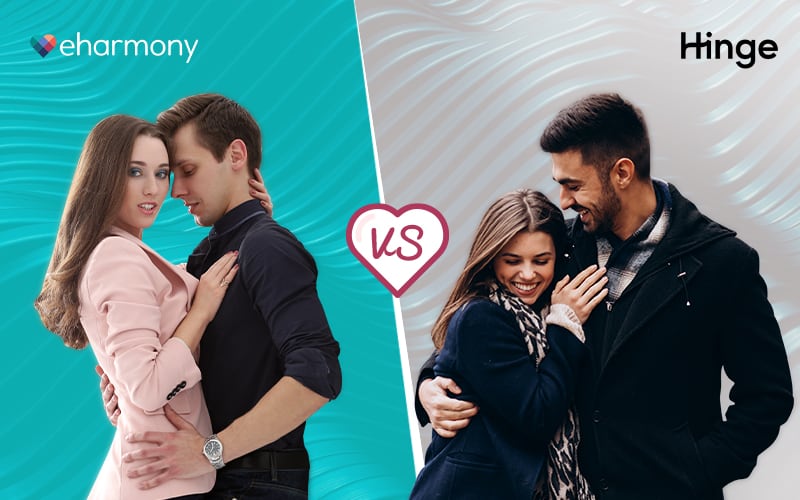 If you're wondering how two of the biggest dating sites stack up against one another, this article will give you a complete comparison of eHarmony and Hinge.

Finding love can be difficult enough, but having so many dating site options can make it even more challenging. eHarmony was one of the first dating sites, but Hinge has recently come onto the scene and established itself as a viable contender.

I've gone through both of these sites and reviewed everything from their ease of use to their compatibility algorithms to help you choose which one is best for you. Read on to see who wins the battle of eHarmony vs Hinge.

Want just the straight facts about eHarmony and Hinge? Read on!

What's the Difference Between eHarmony and Hinge?

eHarmony uses a system based on your interests and personality to find others who'll be compatible with you. While Hinge also looks at personality traits, they use an algorithm based on who you like to suggest new matches.

eHarmony has been around for many years and is one of the most popular dating sites. They've recently gone through some revamps to keep up with more modern sites. They have new features, like video chat, to keep you safe while meeting new people.

Hinge has some great features as well, such as interesting profile capabilities to give other members a peek at the real you. It's definitely a little more hip than eHarmony, but may not be exactly what you're looking for.

Who is eHarmony Best For? Hinge?

eHarmony is designed for people who're looking for their lifelong partner and are ready to get married. Their focus is on finding someone you'll have ultimate compatibility with.

Want to Know Even More About eHarmony and Hinge?

Read on for an even more detailed comparison of the two dating companies.

Below, I've broken down eHarmony and Hinge by category so you can see which site is better for your needs.

Both eHarmony and Hinge use a compatibility algorithm to help you find matches. Hinge's algorithm is fairly basic. It matches you with people based on your interests, and over time, it uses data based on the people you like and who like you to make new matches.

eHarmony has a much more complex system. You'll go through a much more involved questionnaire, and they use 29 points of compatibility to make matches. eHarmony may be somewhat more likely to help you find someone you want to spend the rest of your life with.

Still, there's something to be said for Hinge's algorithm. While it appears simple, they've based their algorithm on the Nobel prize-winning Gale-Shapley matching algorithm. It can help you to find people who share common interests with you and who're likely to be a good match based on your previous choices.

Both Hinge and eHarmony have free basic plans, but you won't get as many features. With the Hinge free plan, you can see full user profiles, but you'll only have a limited amount of likes you can send. You're only able to message someone when there's a mutual like.

With the eHarmony free plan, you get very little. You can join and complete your compatibility questionnaire for free. You can then see some profile information of your matches, but if you want to see photos or start a conversation, you'll need to sign up for a paid plan.

For Hinge, preferred membership plans are as low as $4.99 per month, if you're willing to pay for six months in advance. eHarmony costs as little as $25.90 per month with a 24-month subscription (more about eHarmony pricing here). Hinge is more affordable, but you may prefer the types of matches you get with eHarmony.

3. The Ratio of Men to Women

eHarmony has a ratio of 32% to 68% of men to women (it could be changed in January). Thus, if you're a male looking for a female partner, you'll have a larger pool of potential matches.

Hinge has an almost 50% to 50% ratio of men to women, so you're chances are more equal when it comes to finding someone of the opposite sex.

eHarmony lists all the basics on your profile, like your job, education, interests, pets, etc. You'll also get to answer several longer questions to give your matches a better picture of who you are and what you're looking for in a significant other. You'll also need to upload at least three photos, but you can also include more.

Hinge lets you create your profile with the basics, known as virtues, vitals, and vices. These give other users the basics, while further questions help match you up with other users. Hinge shines when it comes to adding photos. While you can add your standard "dating app" photos, Hinge also has photo prompts that let your personality shine through.

Both also offer in-app messages and chat, so you don't have to give out your phone number or other personal information to talk to people you match with.

eHarmony vs. Hinge: The Winner

Overall, eHarmony is the more comprehensive dating site. Their algorithm is designed to make lifelong matches as opposed to matches for more casual dating. You'll be more likely to find someone who's looking for the same things you are.

Which is Best for Younger Users?

If you're in the millennial crowd, you may prefer Hinge. It feels a little fresher than eHarmony and may help you find the type of partner who'll suit you. You may be more likely to find users closer to your age on Hinge.

If you're ready for a lifelong commitment, join eHarmony and start finding your matches.

eHarmony vs Coffee Meets Bagel – Which One is Better in 2022?